MDAs to be sanctioned for failing to submit audited reports‎ 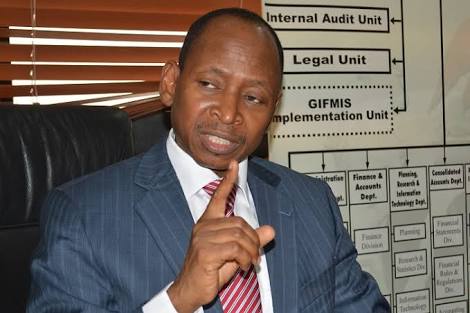 Some Federal Government ministries, departments and agencies (MDAs) are violating provisions of the ‎Fiscal Responsibility Act‎ by failing to submit audited reports, the Accountant-General of the Federation (AGF), Mr. Ahmed Idris, has said.

‎Idris, who spoke on Wednesday during a virtual training for internal auditors on the modernisation of the audit process, noted that some MDAs wilfully submit their audited reports late, while some don’t submit at all.‎

The AGF warned that henceforth, MDAs that failed to submit audited reports would be sanctioned .

Late submission of the report would also attract sanctions. ‎

‎He said, “Permit me to also use this opportunity to reiterate the need for auditors to put in their reports promptly as and when due as specified by FR 1706 which states thus: ‘The Internal Auditor shall produce monthly, quarterly and half-yearly reports for the Accounting Officer on the progress of the audit with copies to the Accountant-General of the Federation and Auditor-General for the Federation’ respectively.

“Regrettably, it has been observed that most MDAs are behind in their reports while others have willfully refused to render these reports which are clear violation of the provision of the Financial Regulations.‎

“Consequently, may I inform you that refusal to forward these reports by any MDA forthwith would be regarded as an attempt to undermine the authority of the Office of the Accountant-General of the Federation and the Head of Internal Audit of such defaulting MDA(s) will be duly sanctioned.”‎

According to him, ‎Heads of Internal Audit in the various MDAs would be held responsible for failure to submit audited reports.

All rights reserved. This post: 'MDAs to be sanctioned for failing to submit audited reports‎' and other digital content on this website, may not be reproduced, published, broadcast, rewritten or redistributed in whole or in part without prior express written permission from Anambra City News.