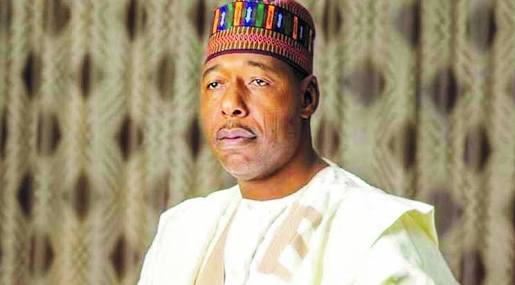 Governor Babagana Umara Zulum of Borno State has expressed deep pains following viral video which showed the execution of aid workers by insurgents in the state.

The governor described the aid workers as heroes that were gruesomely killed in the course of serving humanity.

Zulum’s spokesman, Malam Isa Gusau, said in a statement released Thursday morning, that the Governor was informed of the execution on Wednesday evening, while he was at headquarters of Nigeria Security and Civil Defence Corps in Abuja to discuss introduction of civil-defence volunteer programme and the deployment of more agro rangers to secure farmers in Borno State.

Zulum departed Maiduguri same Wednesday and on arriving Abuja, he drove to the NSCDC.

The insurgents had released a video which showed five blindfolded aid workers with four of them shot at close range, while one was spared even though he was also positioned for execution.

The five aid workers were abducted weeks back during a humanitarian mission to support internally displaced persons (IDPs).

“Governor Babagana Umara Zulum is deeply pained and extremely worried by the gruesome execution of the aid workers who lost their lives while trying to save IDPs through humanitarian activities.

“The Governor mourns these heroes and shares the grief of their families and employers: Borno State Emergency Management Agency (SEMA), Action Against Hunger, Reach International, International Rescue Committee, and condoles with the United Nations Office for Coordination of Humanitarian Affairs, (UNOCHA)”, the statement said.

Gusau noted that Governor Zulum has, in his absence, directed a Government delegation to immediately visit families of the aid workers to participate in funeral activities and to pay condolence visits to affected humanitarian partners through UNOCHA.

The statement also added the Governor wants fresh ideas that would be the way out of the insurgency.

“Governor Zulum wants a new thinking that would hopefully stop these endless killings. We cannot continue to do the same thing over and over and expect a different result.

The Governor believes in a combination of kinetic and non-kinetic approaches and he is of the position that the Nigerian military has, through its operation ‘safe corridor’, demonstrated its willingness to rehabilitate and reintegrate insurgents willing to stop the killings of fellow humans.

The Governor reiterates his call on the insurgents to stop the killings that have been on for 11 years. Zulum also urged all stakeholders to renew commitment to ending the insurgency by being open to new ideas and applying different measures that will hasten good results”, the statement said.