The Pastor, who allegedly committed the crime at Ayede-Ogbese in Akure North Local Government Area of the state, was said to have deflowered the young girl in his house before dragging the girl to the market square at night to sleep with her again. 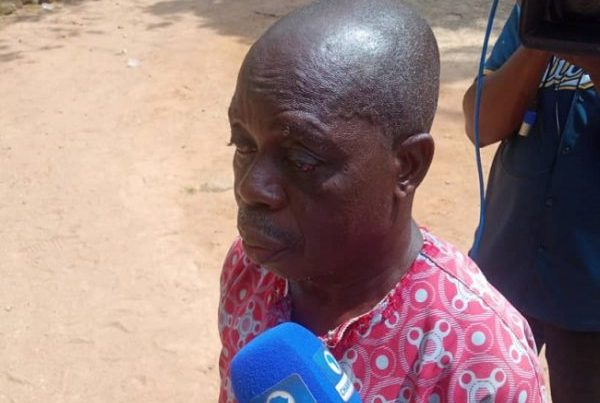 A 61-year -old cleric, Ajayi Famakinwa, who was arrested by men of the Ondo State Police Command for raping a 16-year old girl, has promised to take responsibility for the upkeep of the victim and unborn baby.

The Pastor of the Christ Apostolic Church was alleged to have raped the teenager and impregnated her.

Famakinwa was said to have hidden under delivering her from the evil spirit to allegedly commit the crime.

The Pastor, who allegedly committed the crime at Ayede-Ogbese in Akure North Local Government Area of the state, was said to have deflowered the young girl in his house before dragging the girl to the market square at night to sleep with her again.

Denying, Famakinwa who said he never slept with the young girl either in his house or market square, promised to take care of the pregnancy and the mother until the teenager put to bed.

He, however, said a DNA test should be carried out to reveal the real father of the baby saying he should be sentenced to life imprisonment if he is responsible for the pregnancy.

He said: “It is true that the girl and her father are my tenants. I only prayed for her when I discovered she is possessed by an evil spirit. Each time, we wanted to pray, she would start misbehaving.

“I did not sleep with her. I only confessed to the police that I slept with her because I was being tortured by the police. I am ready to take custody of the child.

“After birth, we will now do DNA to prove my innocence, but if it is discovered that I am responsible, I should be sent to life imprisonment.”

The State Police Public Relations Officer, Funmilayo Odunlami, explained that one 16-year-old came to the station and reported that one Ajayi Famakinwa, aged 61, who is a clergyman impregnated her.

According to Odunlami, the victim stated that the suspect was the one who deflowered her in his house and also took her to the market square at night and had carnal knowledge of her under the pretence of taking her for spiritual deliverance.

Similarly, the Police said on October 17, 2021, at about 1pm, one Agida Moses of Elebisere Road, alongside Madam Bolatito Adebayo, aged 35, of Gbangan Oke Ofa, Ibadan Oyo State who was seriously injured, reported at the station that she was brutalised, raped, robbed and believed to have died after she was attacked by a commercial motorcyclist.

Odunlami explained that the commercial motorcyclist conveyed her at Elebisere Road en route Karo camp when the motorcyclist descended on her.

She said that the bike man along the way diverted into the bush, attacked and raped her having tied her to a tree and thereafter punctured her eyes with his motorcycle key and made away with the sum of N1,800.

Odunlami, however, said the suspect named Ola Omogunwa, aged 23, was later arrested on intelligence and one phone, necklace and other valuables belonging to the victim were recovered from the suspect.

But while confessing to the crime, the suspect said he did not rape the woman but said his gang members only robbed their victims but never engage in raping, saying they used to rob their victims and punch their eyes so as to prevent from identifying them.

The Police spokesperson said the suspects would be charged to court after the conclusion of investigations.

#EndSARSMemorial: “The police have not learnt their lesson” – Patrick Eholor aka ‘Ultimate Equals’ before his arrest.

Police security were ordered to leave the venue before the traditional rulers were attacked by gunmen in Imo State.