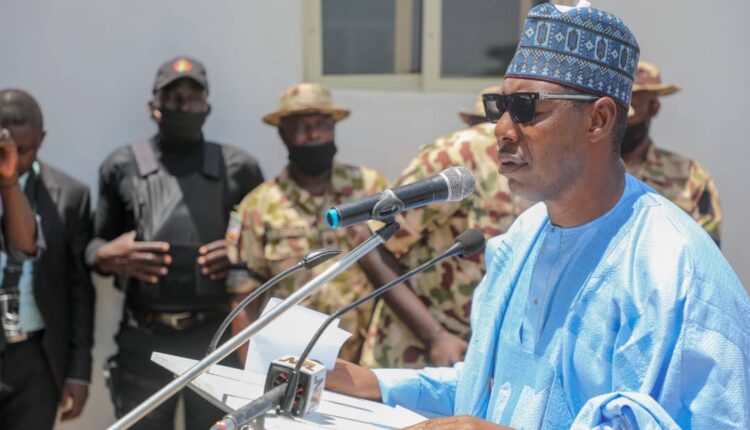 The Borno State Governor, Prof. Babagana Zulum has redeemed his pledges to families of slain soldiers, the Nigerian Army said on Wednesday.

One of the pledges redeemed by the governor, include cash gift of N20 million to the slain Commander of the 25 Task Force Brigade of the Nigerian Army, Damboa, Col. Dahiru Bako, mortally wounded in a battle with Boko Haram on Sunday and buried on Tuesday in Maiduguri.

A statement on Wednesday by the Acting Director Army Public Relations, Col. Sagir Musa said the governor presented a cheque of N20 million for the family of Late Col. Bako and cheques of N2 million each to families of other soldiers killed in the ongoing war on Boko Haram.

The statement read: “The Executive Governor of Borno His Excellsncy Prof Babagana Umara Zulum has redeemed his pledge to the family of Late Col DC Bako and the three other soldiers that died with the senior officer in the course of defending our beloved country.

“The Governor redeemed the pledge when he visited the wife of our fallen hero, Col Bako this morning in Maiduguri, at about 0910 hrs . He was received by the Acting GOC, 7 Division Brig Gen AK Ibrahim. The Governor consoled the wife and family members of Col Bako, and prayed for the repose of the late senior officer and the three other soldiers who paid the supreme prize along with him. He described him as a great patriot and formidable commander.”

The statement added that: “The Governor used the opportunity to present a cheque of N20 million to Mrs Bako, which he earlier pledged and also promised to redeem his pledge of getting the family a house.

“The governor also donated N2 million each to the family of three deceased soldiers; they are – Lance Corporal Nwobuji Desmond, Lance Corporal Adebiyi Oluwaseye and Private Aliyu Ibrahim, whom he described as gallant and patriotic soldiers par excellence.”

The statement further read: “Theatre Command Operation Lafiya Dole hereby on behalf of the Chief of Army Staff, officers and soldiers of the Nigerian Army extend our immense appreciation to His Excellency the Governor of Borno State for the kind gesture.

“The Nigerian Army wishes to once again assure Nigerians of its continous determination and commitment to ending terrorism and other insecurities in Nigeria.”

UN commends Nigeria on improvement in humanitarian access in North-East