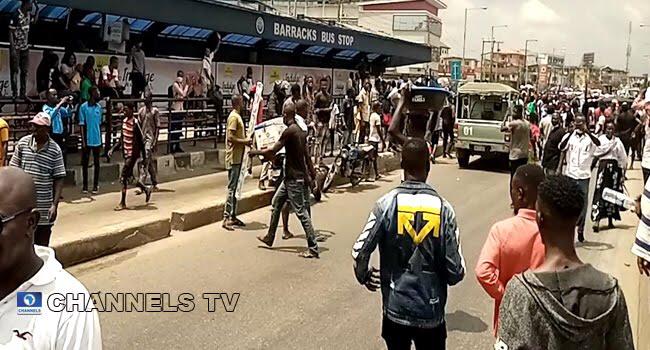 One person was feared dead when the ongoing protest against police brutality, extortion and extra-judicial killings turned violent in the Surulere area of Lagos State on Monday.

It was ‎gathered that two protesters were hit by bullets after police officers shot indiscriminately to disperse the protesters.‎ One of those hit by the gunshot has been reported dead.

Efforts by the medical team at the scene of the protest to resuscitate him proved abortive as he died at the scene.

Another protester was shot in the leg and quickly rushed to the hospital.

Although the police are yet to confirm the incident, numerous videos have emerged showing sporadic shootings with the protesters scampering for safety.

The protesters have earlier blocked the entrances of the Murtala Muhammed Airport and National Stadium Surulere in a bid to express their grievances against police brutality.

All rights reserved. This post: 'One feared dead as #EndSARS protest turns violent in Lagos ‎' and other digital content on this website, may not be reproduced, published, broadcast, rewritten or redistributed in whole or in part without prior express written permission from Anambra City News.

Thanks for reading!
READ ALSO  Man sentenced to 125 years for fraud