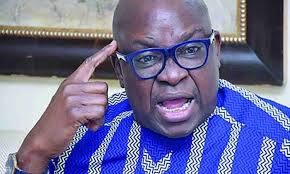 The battle for supremacy between former governor of Ekiti State, Ayo Fayose and Senator Biodun Olujimi resulting in the factionalisation of the Peoples Democrtaic Party (PDP) in the state may have assumed a frightening dimension, on Monday as members of the former governor’s camp allegedly took a secret oath to remain perpetually loyal to him.

The move which showed clearly in a viral video was to ward off any possible poaching from the senator’s camp or the ruling All Progressives Congress (APC) in the state.

Both the former governor and a former chairman of the PDP in the state, Chief Olu-Ojo have denied that members were subjected to oath taking. The former chairman simply described it as “an affirmation of loyalty to our leader”.

In the viral video, the ex-governors loyalists mostly ward executives were seen pledging their loyalty to Fayose and also laid curses on themselves should they betray their leader.

Each of the executives in their video took time to declare “If I betray Ayo Fayose, may the ground swallow me.”

Reacting to the development, former governor Fayose who spoke through his media aide, Mr. Lere Olayinka dismissed the allegation as not only mischievous but a figment of the imagination of the “peddlers of such falsehood”.

Covid-19: Ikpeazu threatens to impose another lockdown in Abia