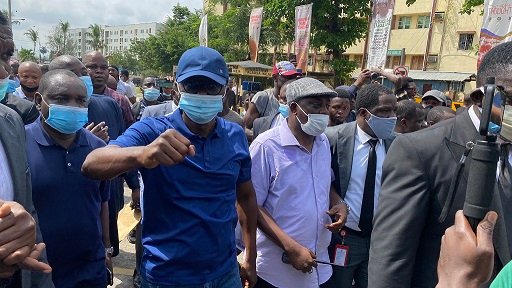 Anyone taken aback by the turn of events around the #EndSARS protests and the Lekki Toll Gate conundrum in Lagos State must have been negligent of the events that led to the 2019 election that produced Mr Babajide Sanwo-Olu as the state governor. He emerged candidate of the ruling All Progressives Congress (APC) in a bitterly fought primary between him and his predecessor, Akinwunmi Ambode, who lost out to the well-oiled machinery of Sanwo-Olu’s godfather.
Almost one year and half later, Ambode’s warnings to Lagos state’s voting population have proven clairvoyant, almost prophetic. His successor has proven to be disaster on steroids. His shambolic running of the state perfected the environment that primed the young population of the state into the baying mob that has left over N1 trillion in destruction of public infrastructure and private property.

Because I was not dismissive of the warnings from Ambode at that time, I am not surprised at the happenings in Lagos State, especially Lekki. After all Mr. Ambode warned but no one listened. He cautioned that his then challenger’s state of mind should be interrogated but people thought everything was politics. Ambode told us preparatory to the electioneering campaign that this man has a health issue but it was waved aside.
It is no wonder that Sanwo-Olu’s singular mishandling of the #EndSARS protests plunged the country into chaos. When the protests first began, rather than play the firm leadership roles expected of him, he preferred to join the protestors thinking erroneously that prancing and chanting with the protestors will lessen their anger at the apparent failings of his government that had worsened whatever brunt the people were bearing from brutal policemen.
Everything was fine while the protestors obstructed and inconvenienced other Nigerians and their businesses. The moment they moved to Lekki Toll Plaza, and threatened the economic interests of the governor’s godfather, his dark side emerged. He could have let them be and allowed his godfather suffer the inconvenience of fleecing the state for a few days but he certainly is not given to such patience. So the governor lost his cool and allowed forces beyond the state take over.
Soldiers fired into the air, with video evidence to prove, when the protest at Lekki Toll Gate was becoming menacing. Sanwo-Olu’s co-protestors claimed a massacre – we should forget that they never had bodies o blood stain to prove that such carnage existed only in the tortured subconscious of the raging cyber mob of clout chasers, fledging celebrities and paid activists.

In the classical Sanwo-Olu style, knowing what he has done and the coming consequences, he did not call for Federal support even though he knew he has no capacity to contain what he has triggered. To compound things, he continued with his ill advised plan and went on to bait his associates in the picket line when he asserted that no life was lost when that was not the agreed script with his protesting associates. What followed was complete chaos. Lagos burned. Sanwo-Olu’s hoodlums burned people’s businesses as retaliation for the losses his boss has supposedly suffered. Government and private property burned at the hands of the hoodlums and the governor added his ancestral home for good measure so that he won’t be suspected as being part of the chaos machine that ruined Lagos. The sad part of that war on Nigeria was the high casualty rate inflicted on law enforcement officers, policemen and others on legitimate duty.

Tragically, Lagos set the pace for the wave of violence that spread across the country. The looting was mindless. It followed the Sanwo-Olu template. It became so effective that it laid waste to the country in a matter of days.
In the whole of this, the Sanwo-Olu was wrapped and entrapped by his own many contradictory statements like when he said he tried to call the President when Lagos was being pulled down by #EndSARS protesters or hoodlums as they were later labelled. The same man said that he did not know where the soldiers who shot into the air came from. Later he said he invited them but did not ask them to shoot. Sanwo-Olu declared that no one died from the incident only to return with news of a casualty from blunt force trauma.

Not done with inconsistency in utterances, the governor added insensitivity to his already lacklustre handling of the crisis when he received his godfather, Asiwaju Bola Tinubu in audience. Sources said the latter flew into France and was forced home by terrorist Indigenous People of Biafra (IPOB) even though there was a spin to create the impression that the Jagaban was in Lekki on the night of the pandemonium and no one saw him. That visit was what jolted Sanwo-Olu’s memory that some persons died at Lekki Toll Gate, but he forgot as a result of memory lapse.

It became necessary for the governor to attempt hiding behind one finger as he hurriedly cobbled together a Judicial Panel of Inquiry, which on the surface is the legitimate step to take but one that Sanwo-Olu managed to taint with his see-saw predisposition. There is the notion of Kangaroo court and that is what the Lagos state governor has become.
According to Wikipedia, “A kangaroo court is a court that ignores recognized standards of law or justice and often carries little or no official standing in the territory within which it resides. A kangaroo court may ignore due process and come to a predetermined conclusion.”
Sanwo-Olu did not even attempt the pretence of making it appear as if the Judicial Panel, like a court, will determine its own conclusion. He set up the Panel and went about making pronouncements that already rubbished whatever the panel will come up with. He has made his own words cathedral over Lagos and Lagosians. This is the Kangaroo hall of shame where helpless eminent Nigerians will be made to sign an already prepared script .
This shame that the governor is exporting from Lagos to the rest of the country is one everyone must watch with keen interest even when they find neither entertainment nor value in it. We must watch closely because, just as he precipitated the violence that enveloped the country, Sanwo-Olu may yet export his diseased concept of a judicial panel to the rest of Nigeria, which will effectively doom the country. As we watch the Lagos Governor squirm in the miasma he concocted, we must ask a fair question. Can a judicial panel of inquiry constituted by Sanwo-Olu still he trusted to do justice? The answer is no. He cannot and must not be a judge in his own case.

Agbese is a human rights activist and wrote from the United Kingdom.

All rights reserved. This post: 'Viewpoint: Sanwo-Olu’s Kangaroo Court on Lekki' and other digital content on this website, may not be reproduced, published, broadcast, rewritten or redistributed in whole or in part without prior express written permission from Anambra City News.