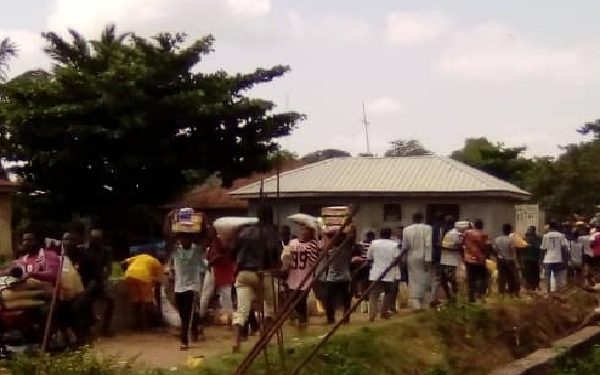 At least three women were feared killed on Monday in a stampede during the looting of a massive palliative warehouse in Gwagwalada in the Federal Capital Territory (FCT) Abuja.

The women were said to have been trampled upon by the rampaging crowd who fell on each other while trying to lay hands on any available material to be looted.

Some who were suffocating were helped out of the building and being assisted with sachets of water.

Some of the hoodlums climbed fences from adjacent compounds near WAEC office while others fought their ways through the back of Fidelity Bank premises.

Parts of the roofs of the warehouse were broken by hoodlums to provide access into the hall.

Personnel of the Nigeria Civil Defence and Security Corps, the Nigeria Police and the Brigade of Guards of the Nigeria Army, who arrived the venue early, blocking the roads with their vehicles, were overpowered and watched as people made away with the COVID -19 palliatives.

Troubles began at about 8.43am as youths gathered within the areas, leading to the warehouse, which was built within five months by the Gwagwalada Area Council.

As they gathered in hundreds, shouting and expressing anger over the sufferings in the land, they were joined by motorcyclists who came with stories of looting and raid incidents from other parts of the country. 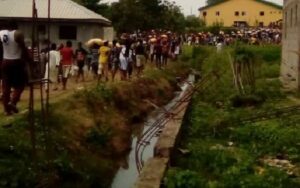 By 9 am, security personnel could no longer control the crowd mostly youth and women who forced their ways into the warehouse, broke the doors and part of the wall and began looting all items inside the building.

It was gathered youths from the surburbs of Angwa Dodo, Wazobia Parks, Tipper garrage, Passo and surrounding areas of Gwagwalada markets joined the massive crowd to help themselves to the looting of the palliatives.

They were heard saying: “This is our money, these people are wicked to have hidden these products and refused to share them.”

By 11.23am, some reinforcements of security operatives forced their ways into the massive warehouse, which had COVID 19 written on it and shut it down.

They however did not use tear gas or fire any shots, which could lead to stampede and more deaths.

All rights reserved. This post: 'Three feared killed as hoodlums loot Gwagwalada warehouse' and other digital content on this website, may not be reproduced, published, broadcast, rewritten or redistributed in whole or in part without prior express written permission from Anambra City News.