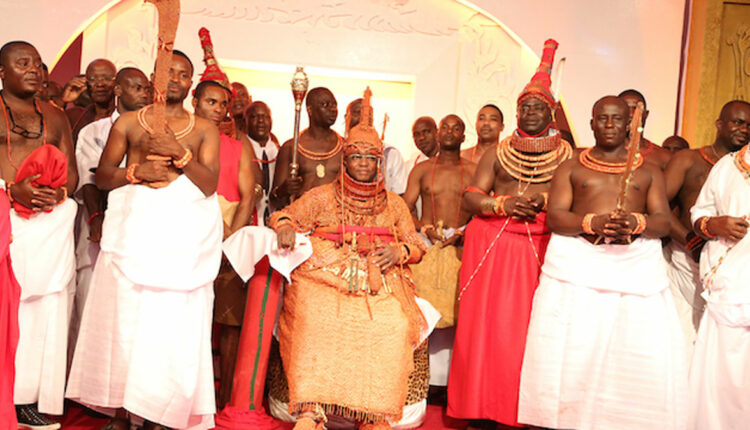 The Edo State Governor, Mr. Godwin Obaseki on Tuesday, led his counterparts on the platform of the Peoples Democratic Party (PDP) on a thank you visit to the Benin Monarch, His Royal Majesty Omo N’ Oba N’ Edo, Uku Akpolokpolo, Ewuare II.

Accompanying the governors were chieftains of the PDP including the PDP Vice National Chairman, South South, Chief Dan Orbih, and the Edo State Chairman of the party, Dr. Anthony Aziegbemi.

In his remarks,the Rivers State Governor and Chairman of PDP National Campaign Council for Edo Governorship election, Nyesom Wike, expressed appreciation to the Oba of Benin, for his timely intervention and prayers which contributed to the peaceful conduct of the September 19 election in the state, in which Governor Obaseki was re-elected on the platform of the PDP.

Wike said that the peace meeting convened by the Benin Monarch on September 2, 2020 and his fervent prayers for peace, contributed immensely to the successful conduct of the governorship election.

Governor Obaseki expressed appreciation to Oba Ewuare II for the warm reception and assured that his administration will serve the interest of Edo people who gave him the mandate for a second term as Governor.

On his part, HRM Oba Ewuare II thanked the PDP governors for the honour accorded him and congratulated Governor Obaseki on his election victory.

He commended the political parties and their candidates who participated in the election for respecting the Benin Traditional Institution by honouring the peace meeting.

The Benin monarch admonished Governor Obaseki to be magnanimous in victory, and called for support for the Governor.

He urged the PDP governors and chieftains to work with the Edo State Governor as partners.

All rights reserved. This post: 'Obaseki leads PDP Governors on thank you visit to Benin Monarch' and other digital content on this website, may not be reproduced, published, broadcast, rewritten or redistributed in whole or in part without prior express written permission from Anambra City News.

Federal Secretariat to be shutdown for Nigeria @60 celebrations