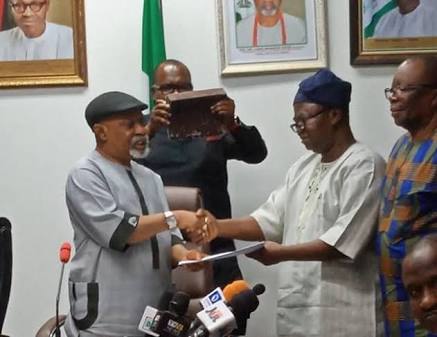 The Federal Government has agreed to release N30 billion earned academic allowance to members of the Academic Staff Union of Universities (ASUU).‎

The money will be paid in tranches between May 2021 and February 2022.

The Federal Government also promised to spend N20 billion on the revitalisation of the education sector as part of concessions meant to end the seven-month strike declared by the Academic Staff Union of Universities.

The decisions are part of the agreements reached during the ongoing meeting between the Federal Government  and ASUU leadership on Thursday.‎

‎The government team was led by Minister of Labour and Employment, Chris Ngige, the minister of state, Festus Keyamo (SAN), and others, while the ASUU delegation was led by its President, Prof. Biodun Ogunyemi.‎

All rights reserved. This post: 'FG to pay ASUU N30 billion earned academic allowance ‎' and other digital content on this website, may not be reproduced, published, broadcast, rewritten or redistributed in whole or in part without prior express written permission from Anambra City News.

‌FG asks all civil servants to return to work by Monday