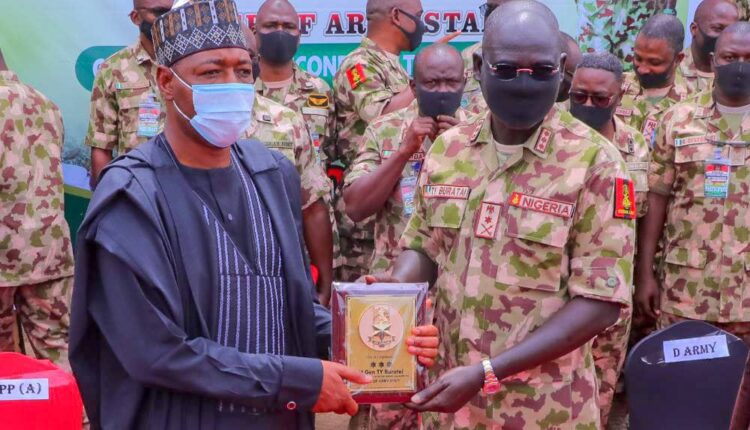 Borno State governor, ‎Babagana Zulum, has advised the Nigerian Army to change its tactics and attack Boko Haram hideouts if it intends to end the insurgency in the North-East.‎
‎
Zulum, who was attacked on about three occasions by Boko Haram within a month, spoke at a conference on Tuesday.
‎
He said, ‎“We must also have the courage to tell each other the common truth and be critical of the troops’ operations when things go wrong.

“As part of the ten-point agenda of this administration, the Borno State Government shall sustain its role as a stakeholder in supporting the activities of the Nigerian Army, through the provision of all the needed support and morale-boosting mechanism to all the security agencies to end the fight against Boko Haram crisis.

“In this direction, I wish to ask the Nigerian Army to change the war narratives all together in order to end the crisis.

“Attack, they say, is the best form of defence.

“The Nigerian Army must have to take the war to all the hideouts of Boko Haram.

“You should not wait and give the terrorists an opportunity for the first attack. You should as a matter of policy, embark on critical clearance operation after successful execution of attacks.

“The Nigerian Army must also embark on confidence-building and confidence sharing mechanism with the communities and civil authorities they find themselves, so as to expose the terrorists, their collaborators and sponsors.”

“In appraising the performance of the Nigerian Army, there is a need to look at the critical issues of competence, dedication and doggedness of officers and men of the Nigerian armed forces.

“Therefore we have to weigh the importance of loyalty and competence, which is very important,” Zulum said.