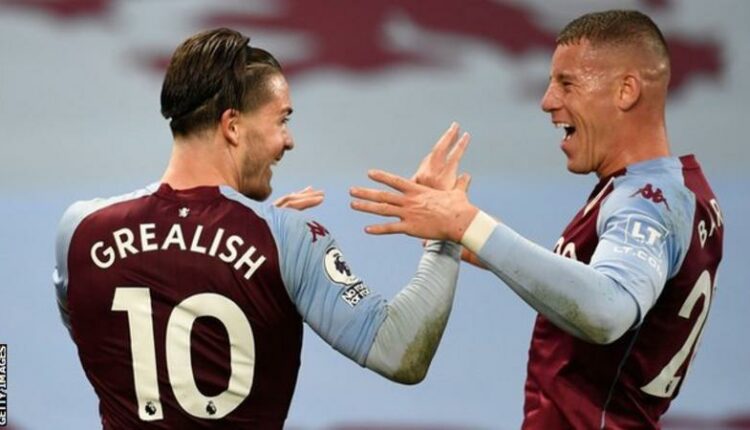 Ollie Watkins scored a first-half hat-trick and Jack Grealish had a hand in five goals as Aston Villa deservedly stunned champions Liverpool with one of the most unbelievable scorelines in Premier League history.

Villa’s record signing Watkins had never scored a Premier League goal before kick-off and 45 minutes later he had the match ball, as the home side took advantage of Liverpool’s high line and individual mistakes.

It is the first time Liverpool have conceded seven goals since 1963 and is only their fourth Premier League defeat since 3 January 2019. Villa, who escaped relegation on the final day of last season, overtake them in the table with their best start since 1962.

Villa’s first was the result of a huge error by Adrian. The Reds stand-in keeper passed the ball straight to Grealish, who cut it back for Watkins to side-foot in from eight yards.

Watkins’ second was excellent as he cut in from the left and smashed into the top corner.

Mohamed Salah looked to have restored order when he scored for the Reds, but John McGinn’s deflected volley two minutes later put Villa’s lead back to two.

It got even better when Watkins headed in from Trezeguet’s cross to become the first player to score a Premier League hat-trick against Liverpool since Dimitar Berbatov for Manchester United 10 years ago.

Villa debutant Ross Barkley, a boyhood Evertonian, was excellent and added a fifth after the break from just outside the box – from Grealish’s third assist.

Salah made it 5-2 from Roberto Firmino’s pass on the hour-mark but then Grealish smashed in Villa’s sixth before latching onto McGinn’s raking pass to add another.

This is the first time in 18 attempts that Villa have beaten the reigning champions at home – the last was a 3-2 win over Arsenal in December 1998.

There have already been many surprising results this season – including Tottenham’s 6-1 win at Manchester United earlier on Sunday – but none can beat this for sheer shock value.

“We never dreamed of getting a result like this,” Villa boss Dean Smith told BBC Sport.

“The performance was outstanding from start to finish. We created an awful lot of chances against an exceptional defence and team. We had to work very hard.”

The game that defies all logic

This is a result which makes no sense – apart from the fact Aston Villa were remarkable and clinical and Liverpool were unbelievably bad.

A team who almost got relegated last season beat the defending champions – who barely ever lose – 7-2.

It is one thing to identify Liverpool’s weaknesses but quite another to take advantage of them in such a sensational way.

Villa are now unbeaten in seven league games, including the run that saw them stay up at the end of last season, and have won all three league matches this season.

Dean Smith’s side managed to get in behind Liverpool’s high defensive line with ease in the first half and Watkins, who was the Championship’s top scorer last season and cost Villa a club record £28m, was the chief beneficiary.

He took advantage of Adrian’s error for the first with his left foot and chased onto Grealish’s pass before cutting inside Joe Gomez and firing home with his right.

Watkins got his perfect hat-trick – in more ways than one – before the break, nodding into an empty net after Barkley’s deep free-kick was collected by Trezeguet who clipped the ball into the six-yard box. He also crashed an effort onto the crossbar as Villa chased an eighth goal late on.

“We have carried on the momentum from the end of last season but we have added quality to that,” Villa boss Smith said. “People have questioned Ollie Watkins’ price. That has probably trebled now.”

Three more goals followed in an equally frenetic second half. Grealish picked out Barkley, whose 20-yard strike was helped into the top right-hand corner by a flick off the leg of Trent Alexander-Arnold. Grealish then scored via a Fabinho deflection before running onto a McGinn pass to add a famous seventh.

What now for Villa? With a performance like this and three wins from three their thoughts will be a lot, lot higher than a relegation battle.

Liverpool were missing first-choice goalkeeper Alisson through injury and Sadio Mane and Thiago, who have both tested positive for coronavirus. But nothing could excuse this performance, surely the worst of manager Jurgen Klopp’s illustrious era.

Even last year when they put out their under-23 team to face Villa in the Carabao Cup, as the first team contested the Club World Cup, that only ended in a 5-0 defeat.

Liverpool were completed wretched. The tone was set from the moment Adrian overhit a simple pass to Joe Gomez, which went straight to Grealish to set up the opener.

Adrian has made five errors directly leading to goals in his 21 appearances for Liverpool – as many as first-choice Alisson has in 92 games. Klopp revealed after the game that Alisson is likely to miss several games with a shoulder injury.

Several of Villa’s goals took advantage of Liverpool’s high defensive line. They just could not deal with the guile of Grealish and Barkley and the finishing of Watkins.

Salah’s double will count for nothing.

Will Klopp treat this game as a one-off anomaly, or will the the manner of the defeat be more of a concern for the German?

“You have to say that Villa did very well,” Klopp told BBC Sport. “They were very physical, very smart and very direct, we were not.

“We had big chances which we did not use, but when you concede seven I’m not sure you can say it would have been 7-7. We made too many mistakes and massive ones obviously. It started with the first goal and around the goals we made massive mistakes.”

All rights reserved. This post: 'Villa score seven to embarrass Champions Liverpool' and other digital content on this website, may not be reproduced, published, broadcast, rewritten or redistributed in whole or in part without prior express written permission from Anambra City News.