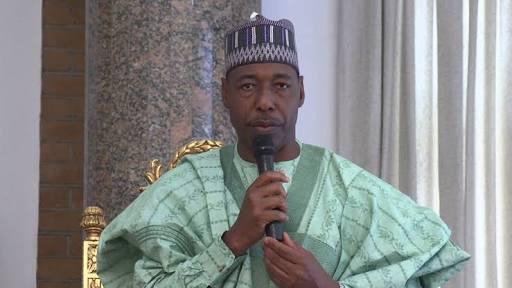 The latest attack, which recorded no death, happened when the convoy was on their way back to Maiduguri.

They were said to be attacked at about 10.30am on Sunday about two kilometers away from Baga.

The convoy, according to some of the people who returned back to Maiduguri on Sunday evening from the tour, were shot at by Boko Haram.

One of them, said: “There was no death recorded this time around except some minor injuries.

“The windscreen of some vehicle were scattered, some vehicles had their tyres busted by gunshots, including the Government House Press Crew bus.

“The military gun truck was also shot at and a soldier had his shoulder scalded with gunshot.”

The latest attack happened minutes after the governor had resettled some IDPs in Baga town.

The governor had on Sunday resettled 521 households displaced from Baga as part of the government plan at returning live back to the commercial border town with riverine environment.

Zulum has distributed food items and cash support to each of the 521 displaced but returned households.

Each households were given a cash support of N10,000 to assist them in resettling back.

While distributing the food items and cash support to the returnees in Baga town, Zulum had reassured them and those to later return that his government will do everything in it’s power to ensure their peaceful and safe living now that they are back home.

He however charged them to continue to be watchful on their children and restrict their movements unnecessarily to avoid falling victims to land mines that may still be scattered in bushes.

He warned that some parts of Baga town are still dangerous to walk as there are still IEDs planted by the Boko Haram which may likely not have completely evacuated.

The governor also appealed to the returnee IDPs to be patient while their individual houses are being renovated, urging them to share residences at least for sometimes before everything is prepared.

He assured them of security from aggression, noting that the Nigerian military, police, civil defence , Immigration Service , CJTF and vigilante hunters have been deployed to provide security of lives and property in Baga and it’s environs as well as ensure establishment of law and order.

He added that as the military continues to clear land mines in parts of the town , the committee will renovate their respective houses and provide them with all the basic facilities and amenities of life for their services while the situation improves steadily.

The governor was later at Monguno enroute Maiduguri at about 12.30 pm, before Monguno he had addressed about 500 IDPs at Baga-Cross Kauwa-Kukawa check point gate.

The governor also addressed another large crowd of Baga IDPs who were not yet screened and given a go ahead to return to Baga at the Monguno Government Lodge.

The governor who addressed the large congregation along with Senator Abu Kyari, representing Borno North senatorial district at the National Assembly, pleaded with the IDPs and assured them of their return back home to Baga town without the threats of Boko Haram.

Zulum commended the efforts of the committee and security agencies , particularly, the military for their support while promising them that his government will continue to support and empower them to enhance their livelihoods in Baga.

He also told them that government has provided an enabling environment, security, food and basic infrastructures for their return and to better their lives in their various communities.

All rights reserved. This post: 'Again, Boko Haram attacks Zulum’s convoy' and other digital content on this website, may not be reproduced, published, broadcast, rewritten or redistributed in whole or in part without prior express written permission from Anambra City News.